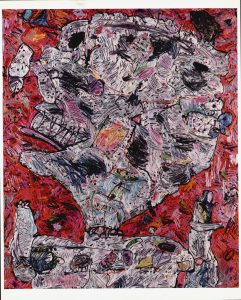 Alden Mason (1919-2013), a professor at the University of Washington School of Art, was the last to have also been educated there, under founders Ambrose Patterson and Walter F. Isaacs. He retired early – after teaching Chuck Close, among others – to pursue painting full time. Close helped him get two shows at the Allan Stone Gallery, where his Burpee Gardens of the 1970s were hailed by New York critics for their links to Color Field painting.

On view as part of the BAM retrospective, these works were the centerpiece of earlier surveys in 1987, 2008 and 2013. Seen more than 40 years after they were painted, their blobby forms and translucent color are now outfl anked by Mason’s subsequent figurative works.

Mason encountered an amazing number of influences and inspirations in his lifetime, from German Expressionism to Bay Area Funk art, Pattern and Decoration, and beyond. Although the artist was criticized for trend-hopping, both his earlier and later works expose a talent that fused drawing and painting to retain an unflagging sense of spontaneity.

Mason’s extensive travels to Central America, Asia, Australia and New Guinea cemented imagery of the shamanic power he witnessed abroad. Viewers will pick up on threads of tribal weaving, effigies, ritual acts and face-painting as they peruse the numerous works displayed.What were recessive color combinations in the New York–inspired abstractions become vivid, chunky blocks of color broken up by wandering lines. Like the drawing medium he preferred, the later pictures remain daringly in process. Mason was an enthusiastic birdwatcher and amateur ethnologist, whose secret power was his ability to convey notions of transformation, animistic energy and frantic activity into canvases of volcanic excitement.