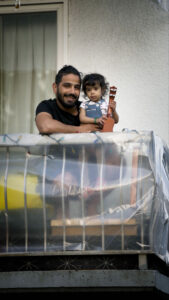 On March 14, 2020, Burnaby-based artist Adad Hannah posted on Instagram a 30-second video of a woman standing outdoors staring at her phone. She appears to be holding a pose; the only sign of movement is the wind teasing her hair. Accompanying the clip is a text that reads: “Yesterday I got frustrated with feeling paralyzed. Sitting at home endlessly reading the news – and decided to do the only thing I’m qualified to do and make some art. I wanted to see if I could capture this strange tense in-between moment we are currently in.”

This was the first of the artist’s Social Distancing Portraits (now numbering over 200). Hannah is known for his tableau vivant photo-based re-enactments and recontextualizations of historical events and paintings. Now, however, the historical event is the pandemic we are in the midst of, and the subjects are not auditioned but chosen at random.

“I get a lot of no’s from people and a lot of ‘What’s this all about?’ ” Hannah told concordia.ca in an interview on April 9, 2020. His method begins with him leaving his home every other day with his camera and tripod. Once a pose is agreed on, Hannah shoots his subject (or subjects, in the case of families) from a distance of five metres. After that he adds a sound score (first by Daniel Ingram, and after March 22 by Brigitte Dajczer), and sometimes a testimonial from his subjects.

As one might expect, the project broadened as the infection rate rose. Variants in the portraits coincided with variants in the virus. “You’re getting a sense of what people were like at the beginning of the crisis, to now, and beyond,” said Hannah. “So I think I’ll keep doing it.”