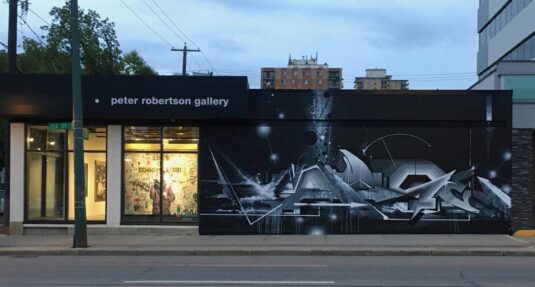 Edmonton, AB
Hours: tue-sat 11am-4 pm and by pre-booked appointment.

Nov 19-Dec 10 Sean Caulfield: Found Anatomies. Caulfield initiated his recent series of mixed media works by drawing on imagery from Andreas Vesalius’s well known 16th-century anatomy work, De Humani Corporis Fabrica Libri Septem. These anatomical references are paired with organic and architectural forms within veiled and abstracted spaces. Caulfield was named a Canada Research Chair in Fine Arts (Tier 2) from 2001-2011, Centennial Professor from 2011-2021, and is currently a Professor in the Department of Art and Design at the University of Alberta. He has exhibited his prints, drawings, installations and artist’s books extensively throughout Canada, the United States, Europe and Japan. Clay Ellis: Flats, Tropes, Rondos. The cake is in the coffee tin marked tea” One of my mothers lines, an example of depression era resourcefulness. Her habit of attaching a history (or sometimes a personality) to an object was entirely something else. Perhaps a result of knowing that every doorknob, latch, newel post, or banister in her childhood home was handmade by her father. By necessity he was frugal but I have a feeling that his desire to fabricate (rather than buying cheap or used) was rooted in something else. I seem to have inherited both afflictions . . . so I make all of the found objects I use. I fabricate a repertoire of images and forms, kept long enough to lose the preciousness of the newly made . . . either easily useable or disposable. This exhibition presents a number of pieces from several series, each representing a work method that allows me to sort, arrange, and compile, these images, objects, and riffs, with a freedom that I haven’t experienced in some time. Opening reception Nov 24, 7-9 pm.