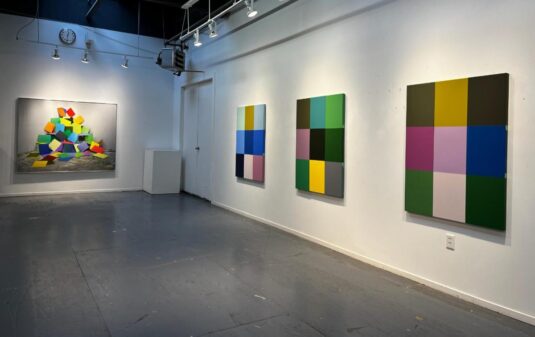 Gallery Jones is pleased to present Michael Batty’s first solo exhibition with the Gallery. Titled Same Difference, the exhibition brings together several series of works that Batty has been exploring for the past four years, all with the modus operandi of pushing the possibilities of colour within seemingly strict parameters. By working with set variables such as pattern and geometric constrictions, Batty is discovering limitless possibilities within variances of colour and composition. In an interview leading up to this exhibition, Batty acknowledged that it has taken his whole life up to this point to learn to take things away; removing elements has been liberating. The accumulation of experience that has led to these paintings can be seen as an equation between equality and difference.

The exhibition features work from the Tone Poem series, an ongoing body of paintings that have informed the more recent Ladder series. The Tone Poems read like visual haikus, equal in their spatial parameters, but different in their effect. Batty, pulling from years of studying colour theory, is using that knowledge as a basis for making what are essentially intuitive paintings, not unlike a piece of improvisational music.

The relationship to music is also present in the Ladder paintings. There is resonance through repetition in paintings such as “Quake” (pictured above). With subtle colour references to traditional depictions of the land, it is the minor interruption and then return to patterns that give the paintings a musical feeling. Batty sees the language and syntax of these paintings as akin to those of the Tone Poems.

If there is an alphabet at the foundation of how the current paintings speak, it is written in the works titled Standard: Scored, a series of monochromatic, laser etchings. These drawings, made by light scorching thick paper, are the building blocks on which much of Batty’s subsequent explorations rest. The work is shown in sets of 8, each piece a variation on the parameters that contain so much excitement and activity when applied to the Tone Poem and Ladderpaintings.

Michael Batty has been a practicing artist for over 30 years. He graduated from the Emily Carr College of Art and Design in 1989 and attended several Emma Lake painting workshops under the tutelage of Anthony Caro, William Perehudoff and Dorothy Knowles. He lives and works in Vancouver, Canada. 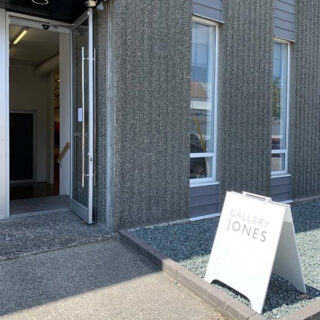