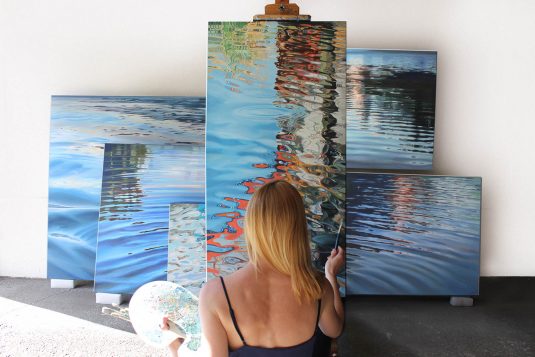 With this solo exhibition, Amelia Alcock-White continues her campaign “Painting for Change”. At the reception on October 7th, Amelia will be painting live. The resulting painting will be sold by silent auction with all proceeds donated to Our Living Waters, a Canadian, non-profit network for groups who aid freshwater health in Canada.

This new collection highlights the currency of water’s intrinsic value, presenting the concept of water as more than a mere material asset, Alcock-White renders perspective on decisions that trade pristine nature for economic gain.
Simultaneously abstract and hyperreal, the series features intricate compositions of the sea and freshwater lakes, vibrating with depth and motion. Dramatic colours, stylized ellipses, reflected shapes, abstract patterns on glittering surfaces recreate the physics of water’s elegant flow. These images move beyond water’s material worth, a transcendence that depicts water as a vital ecological entity and a substance of sheer beauty.

Our Living Waters: “Amelia’s artwork inspires and motivates, reminding us to reconnect with the waters that sustain us.”
David Suzuki Foundation: “What Amelia can express through art is really what is going to get us off the current unsustainable path humanity is on”.

World-renowned painter, Bo Bartlett: “She paints water in a chromatic, reflective and emotional swirl. It’s not as much photorealistic as it is a metaphor for the totality of what is.” 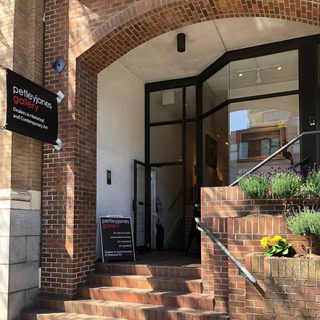